(The background story of a roleplaying character as a guest post by Sabine, a friend of mine. It was originally written for an English roleplaying site.)

A background story serves to imagine the character better. It explains where he comes from and what he has experienced before the actual game starts and what connects him to the setting. Quite often such a background story is anything but peaceful. This is also the case here. 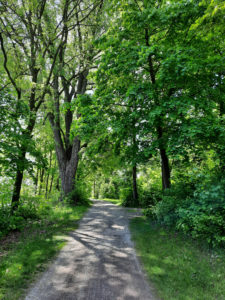 My sleep is rudely interrupted by the harsh cry of an eagle, and when I don’t rise immediately it is urgently punctuated by a painful nip on my shoulder. With a sharp intake of breath, I sit up, fighting the impulse to berate Astraios about his manners. I know him well enough that the part of my brain that’s fully awake by now tells me he will have a good reason to wake me like this. I look up at the proud griffon who has his piercing gaze fixed on something in the lowlands. I follow the look and my heart stops for a moment. A dark plume of cloud is rising roughly where I know Sentinel Rush, my home village, to be.

Not bothering with making heads or tails out of it for now, I jump up and rush to Astraios’ side. I would have swung onto his back without a saddle, but he pushes me back. We are still a few hours’ flight away; after all, that is why we camped on this rock ledge at the edge of the mountains and didn’t fly through into the night. He is right, of course. I know it, even though my heart wants to be on the wing now, this instant, and not in a few minutes.

Hastily, I gather the few things I needed to make camp, stow them away and strap all the gear down onto the griffon’s back. Faster than I would have thought and a lot slower than I would have liked, we are ready to go. With a powerful jump, Astraios launches himself from the ledge, heading towards the rising smoke. A thick fog lies over the lowlands, obscuring the forest. Only the tops of the tallest trees manage to poke through and bask in the early morning sun, lone sentinels in a sea of white and grey. There is an analogy there. Those stalwart trees are much like the scattered outposts of a once caring and dominating Empire, now abandoned to stand alone against the flood of greed and destruction pushing into our land from the north.

It is hard to decide if the trolls or the barbarians are the worse news. Probably the trolls. At least the barbarians do not try to eat the locals, though ultimately dead is dead. I hope that whichever faction has attacked Sentinel Rush – for I just don’t think it is a simple fire I am seeing – was noticed by the guards that the village should have been posting. If they have been entirely taken by surprise… No, I will not consider that. I have to trust that Old Deadeye’s favour has not abandoned us.

The flight seems to take forever while a second, third and fourth plume of smoke rises from the forest. I can’t be sure, but I think the whole village is burning by now. When I can finally smell the smoke on the air, I urge Astraios to put on as much of a burst of speed as he can. He can likely feel my worry, sharing some of it. For some reason he has really taken to the twins, going so far as to having allowed them on his back in the past. Wings beating frantically, we get closer and closer. My bow is in my hands, arrows ready to take on whatever foes we will meet. The first sounds of fighting reach us, and I breathe a little easier. If there is still fighting going on, that means at least some of the villagers are alive, holed up in the old stone tower that stands at the edge of the village. It also means that it won’t be trolls. As formidable as the tower could be with a few dedicated archers manning it, it would never stand up to the sheer destructive power of the giant creatures.

I guide Astraios a little to the side, making sure the sun is not behind us and no shadow will warn the barbarians that death approaches on brown-golden wings. The bow in my hands starts to glow softly as I send a prayer to Old Deadeye, asking for his favor in the fight to come. We come in low and can finally see the village. Four of the five houses are burning and there are several bodies on the ground. I am too focused on the men and women arrayed around the base of the tower to let anxiety over some of those bodies possibly being my family take a hold of me. Instead, I take comfort in the fact that there are also obviously barbarians down and out of the fight.

Only a soft rustling of feathers announces our arrival, and it is lost in the shouts on the ground. One, two, three, four arrows are in the air before the first one even finds its mark but find it it does. All four find a target, albeit the last one only barely. If I didn’t have everyone’s attention then, Astraios snatching up one of the attackers and depositing him unceremoniously into one of the burning buildings as he wings away again certainly does the trick. I can hear relieved shouts from the survivors inside the tower as we come around for another attack.

The rest of the fight passes as if in a blur. A few desperate arrows from the barbarians find their mark in Astraios’ and my flesh, but none of them are enough to stop us. We put a bloody end to their fantasies of conquest and plunder and amidst broken bodies beside the tower I dismount and let Astraios go look for any unlucky survivors while I wait anxiously for the door in tower’s side to open and the ladder to be let down. A look towards the burning houses shows what the smoke already suggested – there is nothing to be saved there. The tanner’s home is the only one still standing – likely due to being a little off from the village proper. I guess it is better than nothing but staying here seems like an ill-advised choice for the survivors.

The door finally opens and the first face I see is that of my beautiful wife, Sintas. One of the heavy loads weighing on my mind falls off of me as I smile up at her. Her face is drawn with pain and there is a blood-stained bandage on her shoulder. As soon as the ladder has been let down, I scramble up, taking her into my arms, healing the wound as we embrace. The twins join us, much to my relief. I dare hope a little more. Hope that at least for my family this day will have a happy end. “Leto..” she sobs and I tense. There is so much grief in her voice that it smothers the hope that blossomed in my chest. “Gordin, he.. he didn’t get to the tower.”

My mind goes blank as I hear the name of our firstborn. It couldn’t be, mustn’t be. I draw back a little, look into her blue eyes that are brimming with tears. “He told us to run,” Darius, the older of the twins, chimes in. I have trouble breathing. Dread going back down to look for him. But I have to. I just have to know. From a pouch at my belt, I retrieve a couple of healing potions and push them into Sintas’ hands. She will see that those most in need of them will get them. Any other wounds can wait. I make my way back down the ladder, stumbling over one of the dead bodies on the ground when I set off towards our house.

I do not need to search for long. When I come around the edge of the house, I see his body lying broken a few steps away. One look is enough to confirm that any help is coming too late. My old shield is strapped to his arm and an axe lies close to his lifeless fingers. I note with a detached feeling of pride that there is blood on the blade. It doesn’t change the outcome of the uneven fight between a thirteen-year-old boy and a battle-hardened warrior. I fall to my knees beside him, tears streaming freely down my face. No father should outlive his son. I don’t know how long I have knelt there, with his head in my lap when I become aware of Sintas and Astraios having joined me. I don’t even realize how unusual that is until much later. The two of them don’t really like each other.

She reminds me of my duties to the living and I cannot help but admire her strength. We have both lost a son, yet here she is, reminding me that grief does not help the survivors. With great effort I let go of Gordin and it pains me to turn my back on him to make my way over to the other villagers.

Wounds were healed, the dead buried, and goodbyes were said to the only home some of the villagers had known for all their lives. I still don’t know how, but I did manage to convince them all that Sentinel Rush was no longer safe. And so they have moved away from there, closer to Valejo. And I have left them, left my family, to answer Mayor Strafgen’s call for aid. My instincts tell me to stay, but my mind understands that the battle we are fighting will not be won in each individual settlement. If the incursions cannot be stopped, then the whole north will be lost. And Astraios and I are more than able to do our part to that end.